A Moment in Gas Street

A photograph provides us with a return ticket to a moment in time and these images take us back to an Oakham that is unrecognisable today. They show a property in Gas Street, a place name unknown to many. However, some may remember William Dalby Street, its new name after 1932. The house featured in both images was located at the end of Gas Street at the junction with South Street. Gas Street took its name from its proximity to the original Oakham gas works. Prior to becoming a separate street, it formed the southern end of Bedehouse Row (later known as Westgate). The house was demolished in the 1980’s when many Victorian terraces in this area were also removed. Photographic postcards like these were often produced by local professional photographers, but in 1903 Kodak introduced a folding camera designed to take postcard-sized prints. Sensitised pre- cut card was also made available at this time and the production of postcards soon became a popular hobby. Our cards both feature the divided back format, introduced in 1902 with the permission of the General Post Office. For the first time it was possible for an address and message to be written on the back of the card, leaving room for a larger image on the front. One of the two featured postcards bears an Oakham postmark “08” on an Edward VII Half Penny stamp. So, we know the image was produced as early as 1902 but no later than 1908. Local records show that Lucy Dexter and her husband John moved into the house in 1908, so the images can be dated to that year.

The photographer has captured a snapshot of a time very different to the present. Home deliveries are commonplace today, but not with the use of genuine horsepower. In this case the product is milk, fresh from the farm at Egleton and free from all packaging. The milk was ladled straight from the churn into the customer’s jug. However, in the midst of our travels down Memory Lane we must not forget that at this time the milk was unpasteurised and a potential source of tuberculosis. In the early decades of the 20th century as many as 25% of deaths were due to this serious bacterial infection. The situation did not improve until the testing of cattle, selective culling and pasteurisation had become commonplace. Sadly, after decades of battling the disease, TB is once again on the increase.
So, who are the characters in these images? A little information was supplied when the postcards were donated to our collection. The lady on the doorstep of the house is Mrs Lucy Dexter. She ran her dressmaker’s business from her home in Gas Street and the second image shows her with her employees. Lucy also found time to take in lodgers during the hunting season, when accommodation was at a premium.

The milkman has been identified as Charlie Grimmer, who worked for his stepfather CW Taylor, grazier and milk seller of Egleton. Charlie took over the business a few years after this photograph was taken and continued to sell milk from his prize-winning herd until 1920. Finally, the third person in the first image was Bill Smith, a local postman whose wife was Lucy Dexter’s sister-in-law. Bill enlisted in the British Army during the First World War. After returning to civilian life he moved to Leicester where he became Inspector of Postmen. 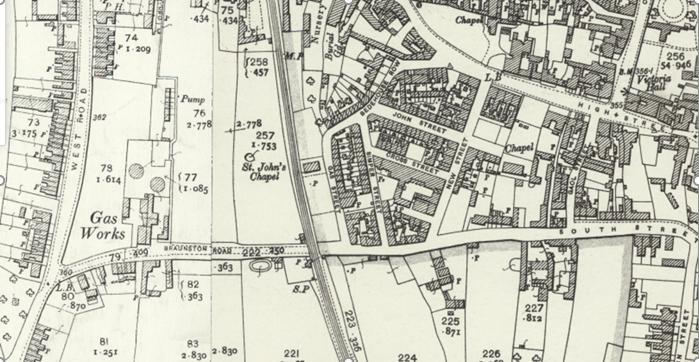 One other person is worthy of mention: the recipient of the postcard. The back of the card records her name but the true connection between “Beattie” and Lucy Dexter was unknown.

Our research has revealed that she was the daughter of an Oakham tailor who moved his family to Leicester shortly after her birth. She was a cousin of Lucy Dexter’s husband; their mothers were sisters. Beatrice Verner found employment as an apprentice in the hosiery trade before her marriage. Through the wonder of the internet, it has been possible to source an image of Beatrice who donated the postcards to the Rutland County Museum in 1976.