A Tale of Two Toms

A little over two hundred years ago a boxing match took place in Rutland to decide the heavyweight champion of England and, by extension, the world. The two protagonists in this duel were both named Tom, Tom Cribb and Tom Molineaux.

Tom Molineaux was born as a slave in Georgetown, Virginia in 1784. His father Zachary trained him to be a boxer, and he fought other slaves for the entertainment of their owners. Having earned his owner, Mr Pinckney, a large sum of money, he was granted his freedom and $500.  Hearing that he could make a living boxing in England, he took a job as a deck-hand on a ship and sailed to Liverpool in 1809. Trained by Bill Richmond, another ex-slave boxer, Molineaux, known as the ‘Virginia Slave’, won his first two fights in England against Jack Burrows and Tom Blake. Tom Cribb, the recognized Champion of England, was coaxed out of retirement to fight him for the English title in the same year, Molineaux losing narrowly and somewhat dubiously in the 39th round. It was widely, and probably correctly, believed because the Fancy, who ruled the sport, didn’t want any foreigner claiming the Championship of England. 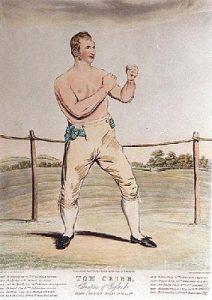 Tom Cribb was born in 1781 in Hanham near Bristol. He left home, aged 13, to work in London, where he was a bell hanger, a coal porter and a bargeman. He was also in the navy for a short while. Cribb’s first recorded fight was in 1805, and for the next 17 years he appears to have earned his living by boxing.  During that time he is said to have only lost one fight.  Christened the ‘Black Diamond’ because of his time as a coal merchant, he was trained by Robert Barclay-Allardice, a Scottish soldier and sportsman.

Bareknuckle fighting was illegal, but fights were still organised. The great fight at Thisleton Gap took place on Saturday 28 September, 1811.  The site, where Rutland, Leicestershire and Lincolnshire meet, was chosen because it would be difficult for the magistrates of any one county to stop the match. Although against the law, the fight was well advertised and huge numbers of people poured into the area.  Over 20,000 people were said to have attended, those who could stood on top of carriages and some even stood on their horses’ saddles, to get a better view.

The fight itself was short and sharp compared to the previous meeting. During the intervening period Cribb had been training, losing some 3 stone in the process, however Molineaux had not trained, instead he went on a sparring and exhibition tour around the country where drinking and eating featured heavily. As a result, although Molineaux caught Cribb’s cheek bone under the eye in the 3rd round, causing a large swelling, Cribb broke Molineaux’s jaw in the 9th round and knocked him out in the 11th round, being hailed as the world champion.

Of the 600 Guineas purse money Cribb received 400 Guineas (£420) and Molineaux’s share was 200 Guineas (£210) together with about £50 from a ringside collection.  By comparison Captain Barclay, Cribb’s backer, was reputed to have made upwards of £10,000 on subsequent bets. After the fight Molineaux went on to win other fights, but after years of drink and hard living, he died penniless in Ireland in 1818. Cribb, after a successful career in the ring and as an exhibition fighter to royalty and gentry, retired in 1822. He was a coal merchant, publican and part-time boxing trainer.  He was one of 18 boxers who acted as ushers at the coronation of George IV in 1821.  He died in 1848 aged 67.

The museum has a commemorative stone marking the fight on display. It was previously sited over the door of the former ‘Ram Jam Inn’ at Stretton. The stone came to us from Stamford Museum in 2007.

Thistleton Gap is now known as Cribb’s Meadow, and is an important nature reserve administered by the Leics & Rutland Wildlife Trust.