One of the objects in our Collections is a model of The Burley Hermitage. The Hermitage in Burley park was built around 1807, designed by the 9th Earl of Winchelsea.
Sadly the Hermitage itself was burnt down for a prank in July 1962, so only pictures and this model remain to indicate what it looked like.

From comparison with a postcard of the early 20th Century the chimney stack is shorter and rustic lattice work in the windows is missing, which suggests that the Hermitage had been deteriorating prior to its demise.

The model of the Hermitage was constructed by William H Sewell aka Billy Bennett. William Henry Sewell was born in the Oakham area in 1912 to an unmarried mother, Lavinia Sewell. In 1914 Lavinia married George W Bennett and they had one son, Jackie M Bennett, before George enlisted in the 7th Battalion South Staffordshire Regiment on 12 April 1916. George was a pacifist so he became a stretcher bearer. He was injured in the Somme area in early December 1916 and died a few days later. Lavinia never remarried. She moved to 21 South Street, Oakham with her two boys and worked as a laundress to support them. Her son William Henry Sewell seems to have lived there until his death in 1985. He adopted the alias Billy Bennett, the surname being his mother’s married name.

A description of the  Hermitage from the Rutland Magazine (IV, 124-5):

‘The building, which has a rustic appearance, is constructed almost entirely of wood. The crevices are filled with furze, and the roof is thatched with reeds. The front of the structure is open lattice work. The interior consists of two rooms, one evidently having been used as a sleeping apartment, as it contains a straw bed covered with fibre matting. There is, also, in this room a fire place composed of rough stones, and the smoke is conducted to the outside by means of a chimney, built of similar material, which rises several feet above the roof of the building. 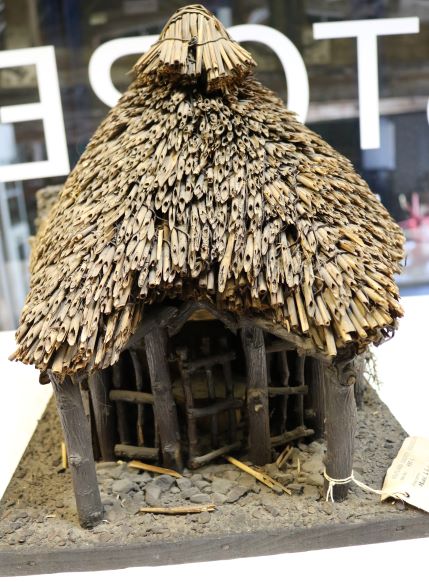 ‘The front room is furnished with chairs, benches and tables, having a home-made rustic appearance. They are disfigured with the names and initials of visitors, a propensity too much indulged in by English people, whether at home or abroad. It must be an annoyance, and it is certainly an eyesore, not only to the owner, but to all lovers of such relics of the past, to see sprawling letters, large and deep, cut into the trees and on every available place both inside and outside the building. After seeing so many examples of this reprehensible practice, one is forced to the conclusion that there are a large number of people afflicted with a peculiar disposition to revert, in another form, to the claw sharpening propensity of a far distant ancestor. The floor of the interior is tastefully paved with pebbles, and the knuckle bones of sheep. They are laid in a mosaic pattern and enclose the letter W., supposed to be the initial of the Earl of Winchelsea, a former owner of the property. The figures 1807 also appear on the floor, indicating, it may be presumed, the date of the erection. There are no authentic records to show how or for what purpose the building was erected, but in all probability it was built for and used as a summer house or picnic lodge.’

Jayne Williams – with hindrance from JH.