The Sound of Music

This bronze plaque has been part of our collection since 1981. It features the image of a woman and bears the inscription Mary Wakefield 1853-1910. So who was Mary and what is the object’s connection to Rutland?

Mary Augusta Wakefield was born in Kendal, in the historic county of Westmoreland. She proved to be a talented musician with a beautiful contralto voice.

She seems to pour out her voice as though it were a generous wine……and I felt, in the perfect peace of listening to perfect singing …   Baroness von Rabe

Her parents’ wealth allowed her to study music on the Continent but conventions of the day prevented her from making a career as a singer. Undaunted, Mary continued to perform in concerts for charitable causes and founded a number of choirs in villages close to her home.
In 1885 she hosted a competition of choral music to raise funds for a local church. From its humble beginnings on her uncle’s tennis court her event developed into a nationwide movement of competitive singing festivals and led to the foundation of the Association of Musical Competition Festivals. Mary’s guiding aim was “not to make professional musicians nor professional choirs… but to inculcate a true love of music”.

In 1907 the Rutland Musical Festival was launched by its founder and President, the Hon. Lady Fitzwilliam of Barnsdale Hall. Entry was restricted to Rutland musicians and those who lived within 10 miles of the border. The Victoria Hall in Oakham hosted the early competitions and concerts but this changed 1925 when it moved to the concert hall at Uppingham School.

In 1922 Dr Malcolm Sargent became an adjudicator and conductor of the festival orchestra and choir, a position he held until the eve of the Second World War. Securing his support was an incredible achievement for the festival committee. Sargent was a rising star in the world of conducting and during this time was associated with the British National Opera, Ballets Russes, D’Oyly Carte and the London Philharmonic Orchestra.

Mary Wakefield continued to work tirelessly to “bring the greatest music within the reach of the greatest number” encouraged and assisted by the many friends she had made in the music world, including Sir Edward Elgar, Sir Henry Wood and Sir Hubert Parry. When she died in 1910 the Association of Musical Competitions declared its intention to…

“raise a fund to provide the design for a medallion, copies of which will be given to each of the affiliated competition centres, to be awarded as a challenge trophy…”

It was to be known as The Mary Wakefield Memorial Medallion and was first awarded in 1912. The Association chose a design in bronze by the French engraver Pierre Victor Dautel. The obverse, shown in the image of our medallion, features an image of Mary. The reverse depicts a harp and the words “A founder of village choral competitions” and the quotation,
“Music Is A Fair and Glorious Gift From God”
These words, accredited to Martin Luther, had particular significance to Mary Wakefield’s festivals where they were prominently displayed on red banners. Sadly, it is not possible to see the reverse of our medallion as it is permanently mounted in a wooden case, which obscures the detail on the back. 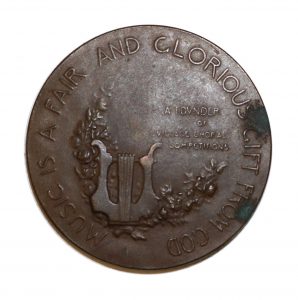 However the Museum also has a miniature replica won by  Mrs Noel-Paton when she was part of Oakham Choral Society which enables us to see the reverse.

The Rutland Musical Festival awarded the medallion to choirs from 1921, the year the event resumed after a seven year gap due to the war and its aftermath. Oakham Choral Society were the most successful choir, winning the competition every year (except 1934 and 1936) between 1921-1938.

Rutland Musical Festival became a much smaller event after 1938. Once again Britain was on the verge of war and even after the end of hostilities it never regained its former prominence. The medallion was no longer awarded as a trophy and after forty-three years found its way into the collections of the museum.

And Mary? Well, her name lives on in the Mary Wakefield Westmoreland Festival, held biennially in Kendal. It’s amazing to think that some of the choirs that she founded still exist and compete in the eponymous festival.